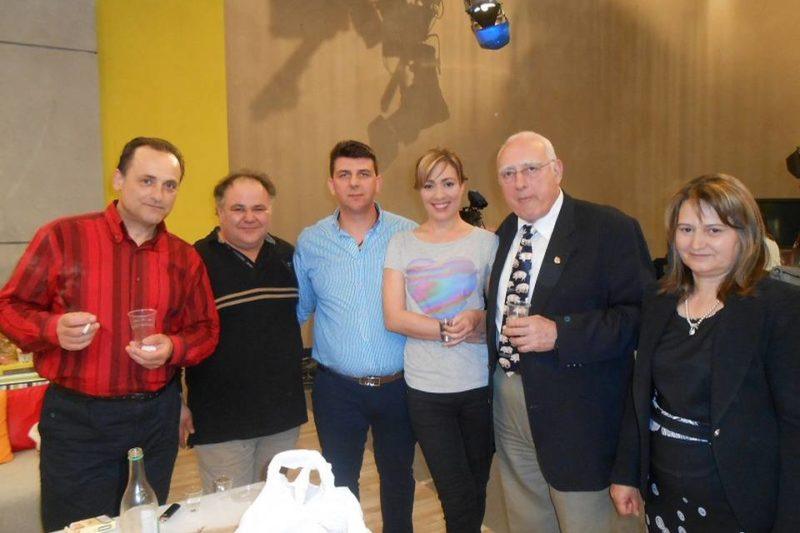 The Food & Beverage Network of Karditsa Region were guests on the show “Menoume Ellada” on Friday, April 17.

The show, which was presented by Renia Tsitsimpikou and Petros Koumblis and which is broadcast live, looked at the Network’s activities and at local products made by the member companies.

They talked for approximately quarter of an hour about the many delicious local products made by companies in the Network and they had samples of these products in the studio.

The two presenters were particularly interested in our region and emphasised how beautiful it is and how many delicious food products are made here. Ms. Renia Tsitsimpikou, who traces her roots to Karytsa, was enthusiastic about our Turkish delight, tsipouro, milk pie and, in general, with all the products made by our businesses.

The following people took part in the show and presented their products:

The president of the Network, Mr. Georgios Didangelos, Manager of HOIROPAL LTD, with the company’s delicious roast pork.

The Vice President of the Network, Mr. Lefteris Tsianavas, Vice President of V. TSIANAVAS SA with the company’s grilled sausages, a wide variety of cold meats and their award-winning air-dried salami “Through olive and air”.

The general secretary of the Network, Mr. Konstantinos Doulias, owner of MELISSOKIMIKI HELLAS, with honey and beeswax products as well as the award-winning Honey “Submarine”.

The Treasurer of the Network, Mr. Thomas Pliasas, manager of KARAGOUNIKO SAUSAGE PLIASSA, with a wide variety of award-winning Karagouniko sausages and handmade pork souvlaki.

The business consultant for the Karditsa Chamber of Commerce and the Network, Mr. Manolis Mavrogiannis, who presented products from the following Network companies:

Some products could not be presented properly during the show, so it was agreed that time would be dedicated in later shows for each company to show its products individually.

At the end of the show, the presenters, technicians, musicians and visitors set up a small celebration where they all enjoyed the local Karditsa products.

THROUGH OLIVE AND AIR – DISTINCTIONS IN GREECE AND ABROAD
”Nomee” magazine