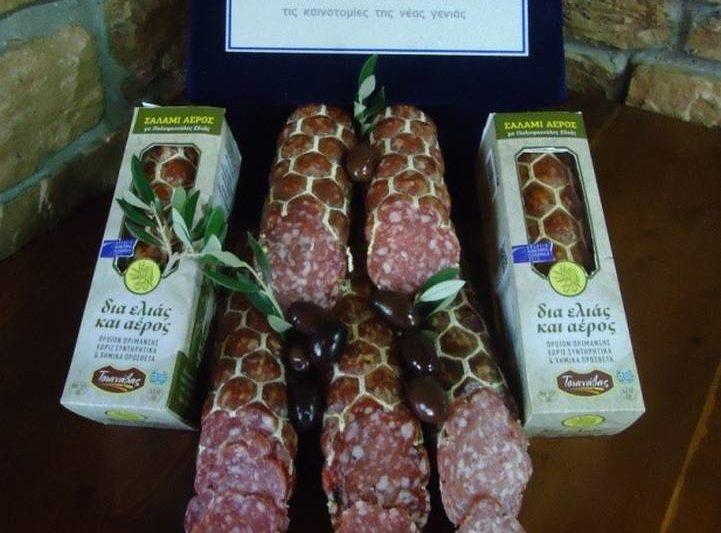 Innovation Award at the Ecotrophelia 2013 competition organised by the Federation of Hellenic Food Industries (ΣΕΒΤ).

Part of the European Ecotrophelia competition which is part of the EUEco-Innovation / EcoTroFood Programme Initial award with a cash prize for “Through Olive & Air” air-dried salami made without any chemical additives and without nitrites. Instead, carefully selected protective cultures and olive polyphenols are added as natural antimicrobial and antioxidant ingredients. The product was developed under the planning and supervision of Dr. Ioannis Giavasis, his students Marios Kandylakis, Efthymios Tsimtsirakis and Sergio Touchikian, in collaboration with Professor Dr. Konstantinos Petrotos, the cold meats company TSIANAVAS SA and the polyphenol production company Polyhealth A.E. The product was released on the Greek market with the name “Through Olive & Air” at the beginning of 2014, after the relevant patent was granted by the Industrial Property Organisation.

Information and examples of press coverage:

10/2014
Recognition and inclusion of the award-winning product “By Olive & Air” (air-dried salami with olive polyphenols and with no preservatives or chemical additives developed at the Department of Food Technology of TEI of Thessaly under the supervision of Mr. Ioannis Giavasis) in a European edition of a book by the European organisation Ecotrophelia with a description of successful, innovative and award-winning foods that have been produced commercially (European Food Innovation-Ecotrophelia Success Stories, p. 6/31). International promotion and presentation of the product at the SIAL exhibition, Paris, 19-20 October 2014 (it was one of only two products from Greece at the exhibition).

7/2015
SEBT award-winning product “Through Olive & Air” developed under the supervision of Mr. Giavasis, was invited to attend an honorary event-conference held by Ecotrophelia Europe in the exhibition Milan FoodExpo 2015 (7/2015) to promote and reward success stories for European innovative foods launched in the European market after being presented awards in the European competition Ecotrophelia.

Our product, Through Olive & Air, had won an award as one of the best products of 2013. See us on page 16 of the catalogue here: